Where you can buy houses in Toronto for under $1 million

The price of detached houses in Toronto surpassed the $1 million mark for the first time in 2015. Since then prices have hovered at a consistent high and according to a new report by RE/MAX, they’re again on the rise. RE/MAX examined the Toronto Real Estate Board‘s 65 districts and found that detached housing values rose in 57 per cent of neighbourhoods in the 416. While this is welcome news for those who already own a piece of this lucrative property pie, those trying to buy houses in Toronto find themselves wondering if and when affordability will return to this hot market.

Despite the affordability woes, detached home sales in the GTA were way up in the first half of the year. Year-to-date transactions are up 17 per cent over 2018 figures – 20,067 versus 17,202 – and double-digit sales increases happened in over 70 per cent of TREB districts, which includes areas in the 416 and 905.

The market correction – especially over the past 18 months – has been the major catalyst for the increase in detached housing sales. It’s all about price,” says Christopher Alexander, Executive Vice President and Regional Director at RE/MAX of Ontario-Atlantic Canada. “The overall average price for detached housing in the GTA is still down marginally (-1.2 per cent), compared to year-ago levels. Year-to-date average price (January to June) was $1,008,177 in 2019 versus $1,020,136 in 2018.

While balanced and seller’s market conditions are evident in the 416, an estimated 45 per cent of Toronto neighbourhoods were in clear buyer’s market territory in June. The tightest area of the city is the East End, where eight out of 11 districts are in balanced/seller’s territory.

If you’re in the market to buy and you have your heart set on the 416, but don’t have a bottomless bank account, here are 12 areas where you can still buy detached houses in Toronto for less than $1 million. 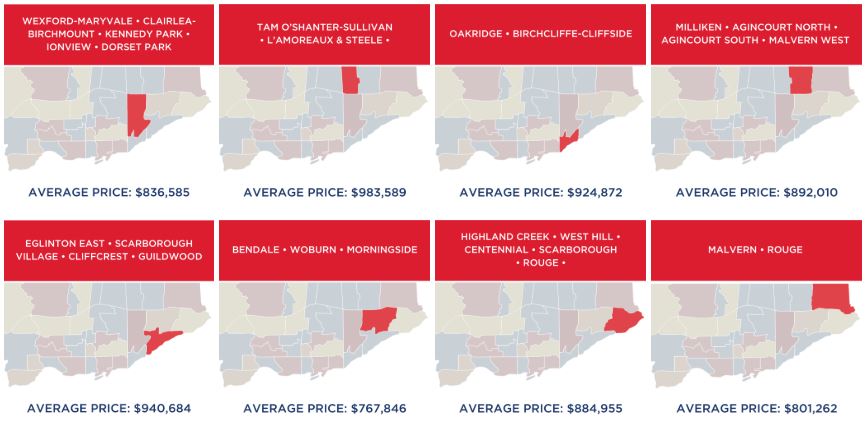